„The Last Ship Sails“
Kati Albert's singing class presented the concert version of Sting's legendary musical on 18.12.2017 at 20:00 in the Haus der Sinne in Berlin.

In his eleventh studio album "The Last Ship", which appeared in the fall of 2013, Sting deals with the decline of shipbuilding in the 1980s in northeastern England, his beloved home of Newcastle. On his 62nd birthday, Sting presented the new songs live at the Public Theater in New York City. The sensitive, Irish-Celtic influenced and acoustically orchestrated songs, accompanied by well rehearsed historical documentary material, caused goose bumps in the interpretation of 10 versed singer personalities.

Check the new cooperation with the training provider TeamSing from Cologne - the ultimate tip for corporate events or company parties.

You can find all dates for Livemusic Training and Rhythm- and improvisation workshops here online.

Online-lessons
the exciting new class of the future 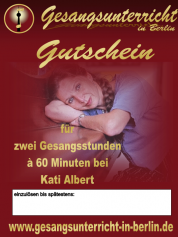 make a present to your friends and relatives, who always wanted to try out singing, but never dared to, and buy them a couple of sample lessons.
one lesson with complete voice analysis inclusive a participation on a "Singing the groove" workshop 40 €

Our final concert at the Species Protection Theater June 2015: